BLACK SUN SCHWARZE SONNE GERMAN RING
The black sun (German: Schwarze Sonne) is a symbol employed in a post-Nazi Germany context by neo-Nazis and some occult subcultures, such as Satanism. The symbol first occurs as a design element in a castle remodeled and expanded under Heinrich Himmler during Nazi Germany. The symbol’s design consists of twelve radial mirrored sig runes, symbols employed as a logo by the Schutzstaffel. All subsequent forms extend from this mosaic. Whether the symbol had a name or held any particular significance among the SS remains unknown. Its association with the occult concept of the “black sun” (and therefore also its name) developed from the influence of a popular German novel first published in 1991. 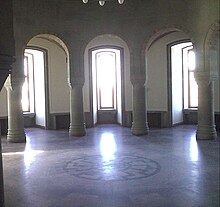 The former SS Generals’ Hall (German: Obergruppenführersaal) on the first floor of the North Tower of Wewelsburg Castle with the dark green sun wheel mosaic located on the floor in the center of the hall

In 1933, Heinrich Himmler acquired Wewelsburg, a castle near Paderborn, Germany. Himmler intended to make the structure into a center for the SS, and between 1936 and 1942, Himmler ordered the building expanded and rebuilt for ceremonial purposes.[1]

A product of Himmler’s remodeling, the symbol widely known today as the “Black Sun” consists of twelve circular sig runes on the floor of the structure’s north tower (the Obergruppenführersaal). The intended significance of the image remains unknown, but the artist may have found inspiration from decorative Merovingian discs dating from the early medieval period (see Zierscheibe).[1]

In 1991, writer Russell McCloud published the popular novel Die Schwarze Sonne von Tashi Lhunpo (German ‘The Black Sun of Tashi Lhunpo’) which scholar Nicholas Goodrick-Clarke describes as an “occult-Nazi thriller”. In the novel, McCloud links the Wewelsburg mosaic with the occult concept of the black sun, which had been introduced in the 1950s by the Landig Group as a replacement for the swastika and as a symbol for a mystic energy source that was supposed to renew the Aryan race. After the publication of the novel, the Wewelsburg symbol became popularly known as the “Black Sun”.[1]